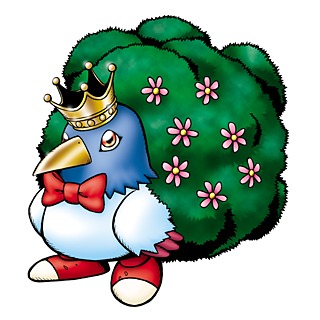 Goddamit do I love this suave looking dude. He was in Adventure, he’s been in virtual pets such as the Pendulum, but nobody seems to talk about him.
He’s a handsome little bird with a bowtie! What’s not to love.
As soon as I had the idea for doing this ABCs series, I absolutely knew that ‘D’ would be for Deramon.
I could also have said Dracomon but I’m convinced everybody loves the small, adorable, little blue friend. Somebody predicted I would say Darkdramon but Darkdramon is hella cool and bones as shit and is in a lot of games and virtual pets so I wouldn’t say he’s underrated either.
Meanwhile, Deramon is a bird with a bush on his arse, a bow tie on his bird neck, and a crown on his head. He’s very cute!
His attacks are ‘Royal Nuts’ (kek) and ‘Gorgeous Beak’ which are just amazing sounding on their own. They don’t really sound like Digimon attacks for some reason, maybe because there’s no mention of bullets or fire or anything dangerous sounding. They actually sound more like Pokemon moves to me, honestly.
Funnily enough, Deramon also is one of those micro Perfect-level Digimon which were very common in Digimon’s early days in Adventure and on the Pendulum along with Mamemon (and all variations) and Piximon. While he’s one of the bigger monsters of that type, he still looks like he could be a Child level.
Unfortunately, Deramon is never shown to be all that powerful and, despite being in a few episodes here and there, isn’t as loved as this royal bow-tie wearing bird deserves to be!

So what’s your favourite Digimon beginning with the letter ‘D’?